The power of enzymes to break down PET plastics

A key player for all life on earth is enzymatic catalysis. Enzymes are complex protein structures which specifically recognize and process molecules, thereby speeding up chemical reactions. In a nutshell, they are micromachines that can efficiently remodel matter on a molecular level. The importance of enzymes dates back to the earliest civilizations, for example for the production of beer, wine and bread. Ever since then, biotechnology-based industries have utilized biocatalysts for manifold applications.

One typical enzyme-driven chemical reaction is hydrolysis. Here, a substrate is cleaved by a reaction with water. Hydrolases are the enzymes that catalyze this reaction and they play a major role in the degradation of biopolymers.

Interestingly, some enzymes were found to degrade PET, a synthetic thermoplastic polyester. But is it likely that these enzymes evolved for the sole purpose to degrade man-made PET? So let’s explore! Plants use a complex natural waxy polyester, called cutin, as a protective coating of their aerial surfaces. Cutinases are enzymes used by several fungi and bacteria to hydrolyze the cutin ester bonds.  In fact, cutinase-like enzymes do not only process cutin, but happen to also recognize similar substrates, such as synthetic polyesters. Hence, such polyesterases can hydrolyze PET to a certain extent. Therefore, polyesterases did probably not evolve to degrade PET. Yet, it would be conceivable that microbes adapt to utilize PET as an energy and carbon source, as suggested for the well-known Ideonella sakaiensis strain, which has been recently isolated from a PET-bottle recycling site in Japan.

But where there is light, there is also shadow

A major problem in enzymatic degradation of PET is its semicrystalline nature. PET consists of both amorphous and crystalline regions where only the amorphous parts are efficiently processed by polyesterases. Amorphous PET is used in food trays and packaging, while higher crystallinity is found in PET bottles. Therefore, not all PET waste can presently be used for enzymatic hydrolysis. However, it is possible to convert crystalline PET into amorphous PET, reaching the goal by a detour. The polymer chains of PET are stiff at room temperature, which is disadvantageous for enzymatic processing. The chains increase their flexibility at temperatures around 70 °C and can be more easily accessed by the enzymes. As a consequence, thermostable polyesterases  are the most efficient enzymes for degrading PET.

Reaction times to degrade amorphous PET materials vary from hours to weeks, depending on the enzyme characteristics and several other factors, e.g. substrate surface area, morphology or reaction temperature. We therefore have to improve the process to increase the enzymatic hydrolysis reaction. Our goal is the fast and quantitative degradation of amorphous postconsumer PET waste. For this reason, our task in the ENZYCLE project is the development of environment-derived enzymes exhibiting high hydrolysis rates against PET. Rather than trying to culture entire cells, which is limited since the majority of bacteria cannot be cultivated, we extract the whole DNA from a microbial community. Sampling sites we are searching are for example wastewater plants, compost or plastic litter. The metagenomic DNA we obtain contains the blueprints of potential polyesterases. We can than fish out the desired information to rebuild the polyesterases and test their capability to degrade PET. Our approach is to optimize the catalytic efficiency and thermal stability of the enzymes further by protein engineering. This will be addressed by altering the enzyme binding site architecture as well as increasing its thermal stability by rational design. 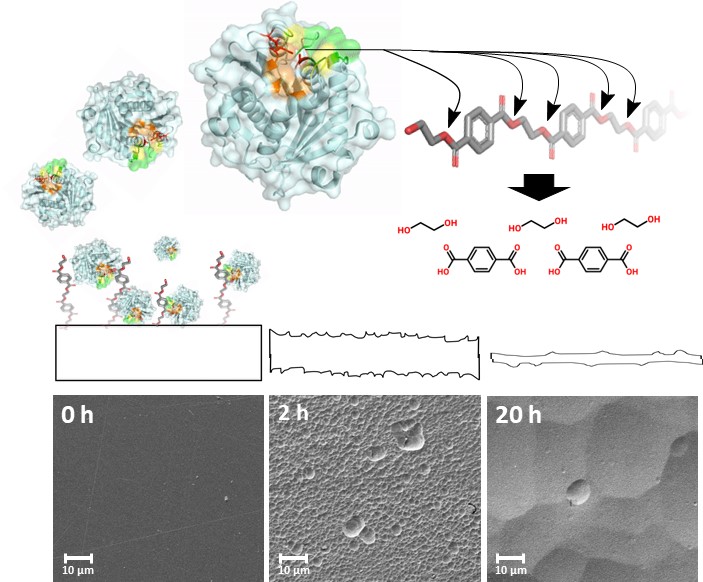 In summary, this work will allow us to explore and develop energy saving and sustainable enzyme-based technologies towards a closed loop recycling of PET waste.

Microbial consortia for the degradation of recalcitrant plastic fractions

This project has received funding from the Bio-Based Industries Joint Undertaking under the European Union’s Horizon 2020 research and innovation programme under grant agreement No 887913.

This project has received funding from the Bio-Based Industries Joint Undertaking under the European Union’s Horizon 2020 research and innovation programme under grant agreement No 887913.

By continuing to use the site, you agree to the use of cookies. more information